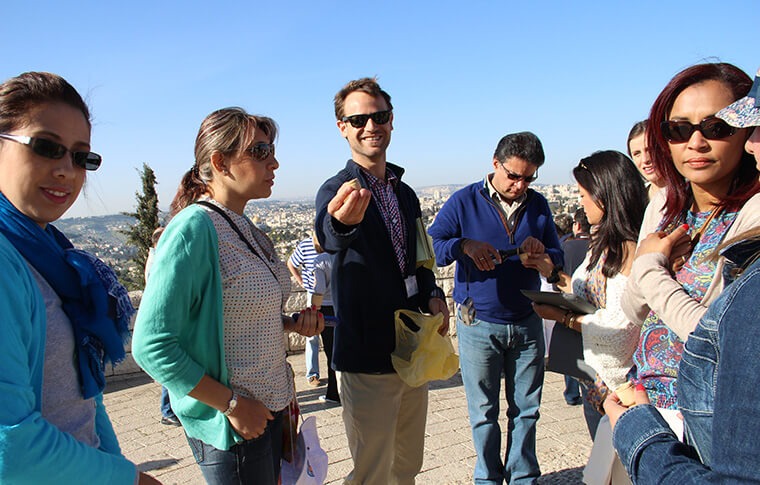 Go beyond the typical tourist sightseeing; instead, connect to yourself and your spirituality as you visit sacred sites of the world’s 3 monotheistic religions — Christianity, Islam and Judaism. Understand the Old City through deeply personal stories of residents, both long-ago and present-day.

Converse with unforgettable characters, with a wide variety of backgrounds and beliefs.

Take a deep look at the old City … and into your own soul.

A backpack to carry your purchases if you plan to do some serious souvenir shopping.

Experience Mount Zion Through Personal Stories of its Iconic Figures

PRIVATE TOUR: Pickup from your hotel. First stop: Lookout over the Israeli parliament building (the Knesset), outstanding for both its architectural style and its significance as the national legislature of the modern State of Israel. Tour the neighboring Supreme Court.
Then head to the lookout at the Mount of Olives, where you’ll admire a bird’s eye view of the Old City. Fantastic photo opp!

BOTH TOURS: Experience Mount Zion via personal stories of iconic figures from the 3 monotheistic religions – David, the red-headed Jewish king, whose tomb is located there; Mohammed, who began his Night Journey to Heaven from the Dome of the Rock; and Jesus, who sat at the Last Supper in the Cenacle.

Visit two of Israel’s holiest sites: 1. The Church of the Holy Sepulchre is sacred to Christians as the location where Jesus was crucified, buried and resurrected. Your guide will give the history behind the Crucifixion, showing how the Bible meets archaeology in this place. 2. The Western Wall is revered by Jews as the last remnant of the Second Temple, which was destroyed by the Roman conquerors in 70 CE. It is also known as the Wailing Wall due to the heartfelt, often tearful prayers of visitors to this site.

Wind your way through the twist and turns of the Old City’s picturesque alleyways. Marvel at the history and culture packed into its single square mile. Pick up a few souvenirs of this tour of a lifetime – you’ll be spoiled for choice with the array of silver Judaica, hand-painted Armenian ceramics, traditional Palestinian embroidery and much, much more. Test your bargaining skills. This is the Middle East, after all, where an asking price is just the starting point for negotiations.

Enjoy The Best Falafel and Hummus in Jerusalem

Break for lunch and enjoy the best falafel and humus in town! You’ll be eating at an authentic hole-in-the-wall setting. In case you’ve never sampled falafel, a favorite Israeli meal, it’s a sandwich made of spicy fried chickpea balls, served in a pita pocket garnished with humus and all sorts of delicious salads. Very tasty … and vegan-friendly. (Lunch not included in tour price.)

Walk the rooftops of the Old City to admire this fascinating quarter from a unique perspective. Hear personal stories that give you a window into present-day life in Jerusalem, as your guide initiates conversation with a diverse array of locals – priests, rabbis, market vendors, and various colorful characters.

Safety: Every centimeter of the Old City is monitored by security cameras, soldiers and police.
Guides: Check out the guide page here(opens in a new tab).
Food: Try out the best falafel and hummus in town. These two taste treats are the basis for the wildly popular falafel sandwich, served in a pita stuffed with an array of mouthwatering salads.
Be Aware: Taxis in Jerusalem are plentiful and reasonably priced. No need to tip your driver — it’s not customary. Be sure to bring a bit of paper where you’ve written your most fervent prayer. Then slip your request into one of the tiny crevices in the Western Wall.

Asaf guided us around Jerusalem today and made the trip enjoyable for all members of the party. I would highly recommend him to anyone in search of a knowledgeable guide who is both interesting and friendly.
Read More

Asaf proved to be very knowledgeable and passionate about the history of Israel and extremely generous with his time {…} we would be very happy to recommend with all our heart as the best guide in Israel.
Read More

Review Our Other Options

Recognized by Israel Ministry of Tourism 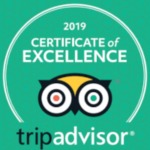